Jamez45 said:
We have an Australian Shepard and a cat..the cat actually is the boss to the dog lol!
We just lost our other Australian Shepard and Golden retriever this year and the cat told them what's up too. They all got along well but cats kinda do their own thing usually. Training a puppy is a little bit of work but well worth it in the end. Good luck with whatever you decide.
Click to expand...

lol, u said the cat is the boss of dog, i am considering taking a cat now:star-wars 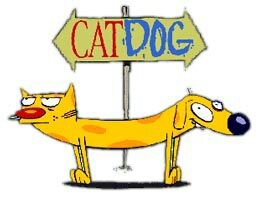 Conjoined siblings -- one a dog, the other a cat -- deal with the unique challenges of their existence. Cat, the more clever of the two, frequently has a plan or a scheme in the works, and more often than not, that scheme goes awry. Together, the brothers face constant ridicule from the Greaser Dogs, as well as from Winslow, a mouse that lives in the wall of their house. Cat longs for fame and fortune, while Dog is happy chasing garbage trucks -- a pursuit that always ends with Cat being towed helplessly along as Dog runs headlong after the next truck.


Sent from my VS990 using Tapatalk

Get them both together. I did that and they were best of friends.
For Bulk Price
Rep Email:

Cats are pretty easily taught all the same tricks as dogs, they're just not into the whole blind obedience thing and thus don't always do things on command.

There's only so much play you can do with your cat. Most love to play with string toys and they'll bat their little cat ball toys around, but it's almost like they're humoring you.

Dogs love to play, and it's often interactive play that they want — with you. You can play fetch with a ball or a disc. You can enjoy an exciting tug-of-war session. You can play chase in the yard.
K

Get a doggo if you have time for walks and training them.
J

if i wanted a pet and a cat was the only option i would not get a pet, dog for sure.
G

I’ve had dogs and cats. Both are awesome and you can’t pick one over another for the most part.
My dog passed and she was amazing, I found 2 kittens when she was 7 and they all got along. Now my cats are 5 and I used to not like cats but they’re actually really friendly and smart animals. They follow me around like a dog and will sleep on the couch, and come to my command.... they’re like mini dogs. You’ll end up loving cats if you’re on the fence. Trust me, these kittens I grabbed because it was cold and I was in a rough neighborhood late at night before thanksgiving and they were under a busted up shed, they wanted to come so I let them in my truck and planned on putting them to a adoption center. 2 days later I took them to the vet and got their vaccines etc........ they adopted me because they were so cool and friendly.
Grizzly978 is a fictional character. All posts are for entertainment.
You must log in or register to reply here.
Share:
Facebook Twitter Reddit Pinterest Tumblr WhatsApp Email Link