Why is everyone so obsessed with the pros drug use but not many care about their different training, diet or recovery protocols? Wouldn’t it vary?

because people have a flawed perception of work ethic. they all think they train hard enough and eat enough but don't grow. so they think it must be the gear. its always been that way and always will be.

people think they train hard because they are getting stronger on a certain movement, but is it bodybuilding strong or you just getting better at the movement and learning to use other leverages to power through the weight, again flawed.

just because the scale is moving up doesn't mean that your surplus of calories is turning over new muscle, again flawed. glycogen water fat is what's its probably is more than muscle due to not eating the right foods and macros.

very easy if you think its the gear than blast 2 grams of test for 20 weeks and see how much muscle you put on keeping all other variables the same. quite the eye opener.

because people don't want to accept that genetics reign supreme - in life in general, and in bodybuilding in particular
G

Cabron said:
because people don't want to accept that genetics reign supreme - in life in general, and in bodybuilding in particular
Click to expand...

This. Some pros are pretty lazy in the gym. Although maybe they worked out like madmen to get to their current size and now just maintain

Because the drugs are the secret!! If you just knew what they were using…you’d look just like them
B

Myostatin plays a huge role also. This may be genetic and environmental and stress related. If you are someone that has a lower genetic limit to muscle hypertrophy due to high myostatin without constant gear you will need crazy protocols. This is why everyone builds and holds muscle variably. I unfortunately have a laser metabolism and I have to use BIG dosages. My old training partner would lose no mass off cycle. Skipped days. Skipped meals. And would always carry a lot of mass. When we get a REAL myostatin inhibitor it will open up bodybuilding to the best work ethic instead of the best genetics. My 2 cents anyway.
C 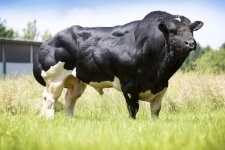 Cabron said:
because people don't want to accept that genetics reign supreme - in life in general, and in bodybuilding in particular
Click to expand...

This is spot on.

There are no secret training methods or diets. They are bigger because they have better genetics, respond better to drugs, and take the risk associated with those higher dosages.

Training and diet are extremely important, but the minute small minute details are over analyzed.
B

Is this cow on infinite tren pellets? Or has no myostatin I’m guessing?

Just like everything else in life, I think you can sum it up with Dunning-Krueger. Everyone thinks they know more than they do. Most guys in the gym for five years think they have it figured out. Guys in the gym for 20 years will say "seen it all, done it all". Just because youve been at it for decades doesnt mean you know shit. I know guys who have played guitar for 15 years that arent good at all and knew kids who played for 2 that were crushing it. Time clocked in, is just time punched on a card for some people. It doesnt equate to competency or skill.

I dont give unsolicited advice to anyone in real life. Ever. But if I did, I can guarantee you 99/100 guys in the gym training for a few years would want to tell me to go F8ck myself if I critiqued anything they were doing. Because they truly believe they have this part figured out.

So since they think they have everything else figured out, got to be the drugs.

Now im not saying Jay cutler was lying about what he took but he could be talking about the very last cycle he did. So he wouldn't be lying because he did actually take what he said which would be what he remembers doing last. Do I believe thats what he took when he was chasing coleman? I dont. But as many as said, it doesnt matter. If he doesnt have detailed logs, he may not even remember exactly what he did and that lines up with what Big A said about pros. So, both what Jay and Big A said, could be true. We'll never know and I dont actually care if jay took 5 grams of test and 30iu of hgh a day because that would kill most people if they tried it, and I and they, wouldnt like like cutler, if this were the case.

So most guys think they have diet and training on lock, have done the cycle (minus the 9-12 iu of Pharm HGH a day..which lets be real, isnt the same cycle without the hgh) Jay claims he took, and immediately think he's lying, that theres more to it (there probably is) but everyone here knows fundamentally that it doesnt matter because odds are 3 iu of legit hgh would have them sleeping all day and its almost a given what they think they have figured out is actually wrong but theres no convincing them. It's almost impossible to get someone to admit they were wrong about anything. Try getting them to understand they've been doing something wrong the majority of the time theyve been doing it.
What can be asserted without proof can be dismissed without proof.

BigHobz said:
Is this cow on infinite tren pellets? Or has no myostatin I’m guessing?
Click to expand...

"The Belgian Blue has a natural mutation in the myostatin gene which codes for the protein, myostatin ("myo" meaning muscle and "statin" meaning stop).[5] Myostatin is a protein that inhibits muscle development. This mutation also interferes with fat deposition, resulting in very lean meat.[5] The truncated myostatin gene is unable to function in its normal capacity, resulting in accelerated lean muscle growth. Muscle growth is due primarily to physiological changes in the animal's muscle cells (fibers) from hypertrophy to a hyperplasia mode of growth. This particular type of growth is seen early in the fetus of a pregnant dam, which results in a calf that is born with two times the number of muscle fibers at birth than a calf with no myostatin gene mutation.[5] In addition, a newborn double-muscled calf's birth weight is significantly greater than that of a normal calf.[4]"
R

Because drugs are more easily replicable in most cases. We’re naturally lazy so it’s easier to mimic a pro‘s reasonable drug protocol than a grueling training program.

There was a time when I would have been interested in learning about both from them. Now IDC really but it’s probably more interesting to hear about drugs.

Myostatin is interesting because of how many pathways it affects. But the prevalence of people with myostatin genes advantageous for hypertrophy is infinitesimally low even at the top of competitive endeavors where muscle mass reigns supreme (it's been measured). It doesn't appear to be something that meaningfully determines success in bodybuilding or any strength sport. But I do agree that a potent myostatin inhibitor (btw, Test is a myostatin inhibitor, it's just not as potent nor targeted to the pathway as Follistatin) would be a very useful compound.

Anyway, I AM actually highly interested in training methods among bodybuilders and I basically collect all the various training methods used. I'm still working on collecting more as there are certainly methods I haven't learned about, but it's very interesting to me at least.

Here is the real answer:

It is extremely easy to find out their training and nutrition routines because that information is EVERYWHERE.

Steroids are illegal, so information on what they take is much harder to find, which increases the demand for that information.
B

I don’t think anyone is obsessed with what they take….

With social media, we all have access to their workouts, full day of eating, etc.
I know a lot of guys post these videos on YouTube.
Even before social media, you had Ronnie and jay and others with their dvds that showed the above.

The only question that probably no one will ever know the real answer to is their gear protocol so naturally people are curious.

I honestly think it’s my generation that is so hung up over what they take and how much of it. Because younger guys will feel the need to compare and contrast with their own cycles. In reality I’m sure pros are hesitant on spilling their beans to the fullest extent because they don’t want anybody copying them.
B

Because injecting like a pro is a lot easier then training, eating and recovering like a pro. So people want that sure fire thing that is guaranteed to make them the next internet star. And only takes a few minutes to do.

because any dumb monkey can lift weights. its not rocket science AT ALL.
pick ur fave method to stimulate the muscle. boom.
lil more science behind drugs so bit more fun to discuss.

Would you eat 1000 grams of protein aday?

Would you try to bench 600 pounds

We all know how to drive a car, I want to know what's under the hood.
You must log in or register to reply here.

Where is everyone buying their…
2

Question for the IFBB pros (or anyone else)
2

Higher fat content in pros diet - how's that possible with potential slin use?
2 3 4

A
Need help with different types of GH