Im wondering if he is 230 in these pics? Great inspiration here!

Amazing physique. It's mad that his highest O placing was only 10th but he was competing against the best of the best. You have guys competing like that in this years Olympia classic physique. Some may be a touch smaller due to the weight restriction but they are not too far of that. There are guys who still look like that it's just in the open they obviously go more for size now so most are 50 pounds heavier and with that comes the bigger waists etc. Callum Von Moger is another physique I rate highly and he looks similar.
Use code "ELVIA5" to get 5% OFF your next ProfessionalMuscleStore.com order!

Use code ELVIA1023 to get 5% off your next Synthetek Order.
For a limited time only, if your order is $300 or greater, they throw in a product of YOUR choice absolutely FREE.

GENOTEC REP
US DNP available. PM me for a list or if you have any questions.

Milos .. haidar.. etc and all the " classic" guys of yesteryear are all about genetics.. its their build.. they trained heavy ( milos used to thtow around imptessive piundages as did haidar) but this is how their body ddveloped.. they took the same drugs ( as we know milos loves insulin) and all trained about the same.. yet one person will look like a tank ( branch warren) and another looks like haidar..

Case in point is seeing haidar train in video with 405 bent overr rows.. 400 pound benches.. yet he DID NOT HAVE THE GENETICS FOR SIZE.. others do those poundaged and they get thicker than shit.. remember all these guys were chasing ronnie and dorian.. they were all pushing for size.. some coukdnt get no matter what.. they stayed smaller.. by no account of their own really.. milos had a great physique.. but he didnt do anything different to develop it than ronnie... the training system he uses in tegardsx to circuit training is only before shows and is used in coordination with insulin.. otherr than that hectrained heavy and hard. He looked one way ( even with all the insulin usage) and ronnie went another..
Use code "LAT5" to get 5% OFF your next ProfessionalMuscleStore.com order!
LIKE - ProfessionalMuscleStore Facebook
Follow - ProfessionalMuscleStore Instagram

He started playing the size game if I re-call in the later 90's
He was more into conditioning before that.
Unfortunately he stopped competing. If he didn't I believe he would have grown quite a bit more.

In terms of what happened to these physiques, I think the size game just kept on going. To win shows you had to get bigger and bigger. I mean even Milos began trying to get bigger in the late 90's.

No growth hormone guts either?

Great physique, one of the best!
Check out my current log, link below:
Rambo 2.0: Taking it to the Next Level 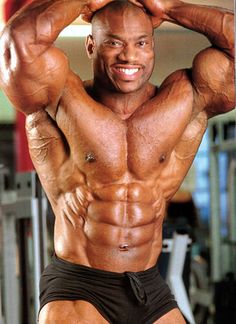 Z
What happened to this guy