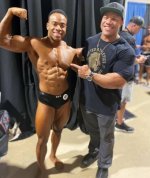 Phil this past weekend at the Phil Heath classic. He looks in a very good healthy shape.
T

It looks like he's touching that guy's nipple.
L

haha, yes i was thinking the same thing.

he sayin, look at that puffy nip

He's pointing out the gyno

Is that dude natural?

He looks down sized. Is he retiring

"He had a meteoric rise to the top of the board and an equally meteoric fall to The Isle of The Damned."......OTH

I do not condone or assist in illegal activity, my advice is not for those who break Laws.

this is the angle of the photo, I reassure you, it is still big
IFBB PRO COMPETITOR

GENOTEC REP
Genotec Laboratories is your best gear choice, no equivalent quality !
PM me for any questions and list.

GENOTEC REP
Genotec Laboratories is your best gear choice, no equivalent quality !
PM me for any questions and list.

lol literally all you can see is his forearm. but yes i see what youre trying to say

prodaf said:
this is the angle of the photo, I reassure you, it is still big
Click to expand... 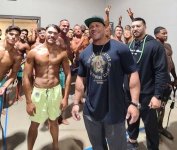 Looks downsized to me for sure except those insane forearms lol. I think he's retired now. You got 7 Olympias tied with Arnold so what more do you need to prove.

I don’t see Phil coming back to the O..Athelticon maybe? But I think he’s done.

For some reason when I first scrolled down, I didn't look at the faces, just the body. So I assumed the shirtless guy is who you were referring to as Phil Heath Almost did a spit take...I thought it was intended as a joke.

Regardless, I hope that he's healthy. He may not be the most popular Mr. Olympia, but he's more than proved his dominance in the sport.
You must log in or register to reply here.